As continued ice storms descend upon the plains I have been pushing further and further south; the farther south I have gone I have harbored the thought that I was entering civil rights territory. When I got to Brandon, Mississippi and was hanging with my friend Allison I was asking what was around the area in search of the ultimate “Mississippi” thing to do. After some back and forth I got a flash of inspiration and asked “where is Selma?” Although I have yet to see the movie, I know of the events that surround the town. I found that it was not in Mississippi as I had assumed but in Alabama. A quick google search revealed that it was merely 3 hours away. With Allison working through the day it seemed doable, six hours out of the way, but doable.

This morning I checked the weather, read up on my history facts, hopped into Javier, and made a run to the state line. As the radio stations fuzzed out I turned on my latest song obsession and put my introspective cap on. I began to think of the people who had taken the exact same road I was driving to get to Selma on March 7th, 1965, almost exactly 50 years ago. The three hours flew by with many thoughts tumbling around my head. I decided to go to the church which served as the rallying point first. Even as my GPS brought me closer and closer I felt as though I was stepping back in time. Then, with little fanfare, there it was, the building from all the pictures. 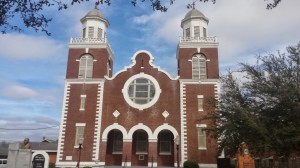 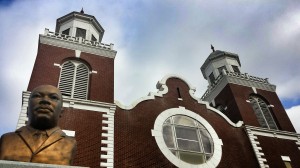 I parked and picked my way through the neighborhood, which bustled without a second thought of what I perceived as hallowed ground. Unfortunately, it was closed to visitors, but had memorials placed strategically around the front. Two placards across the street gave a good run down of the historical events. 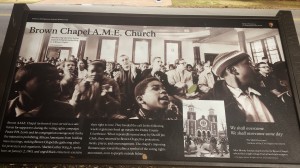 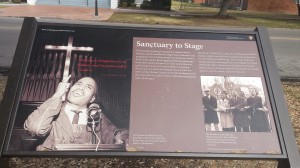 I could not help but stand breathless at its steps and grip the handrail as if grasping the hand of the people who had strewn from this building singing “We Shall Overcome.” That was a good word, I was overcome.

Then, like anyone does, I began to wonder what that time was like, and how I may have been if I had lived in that era. A sobering thought crossed my mind, would I have gone to the March? As I got into my car to head over to the bridge it struck me the excuses that quickly came to bear. Well…it probably would have been far, a single girl like me probably couldn’t have traveled such a distance; and if I was working I probably wouldn’t have taken time off, much less had the cash to fund such a pursuit. Plus, the DANGER. I soon had to marvel to myself at the futility of begging forgiveness and harboring guilt for not hypothetically participating in a march 50 years prior, but I couldn’t shake the question. What would I have done?

Less than 5 minutes later I turned the corner facing the Edmund Pettus bridge and tears sprung to my eyes. What a magnificent, ugly, and momentous landmark. There was parking all along the main drag toward the bridge but as soon as I saw it I had to curb the urge to immediately park and run towards it, I calmed myself and snagged a spot at the closest intersection. I got out with my camera and tried not to act like a complete tourist, but I got a couple of strange looks at the tears coming down my face. 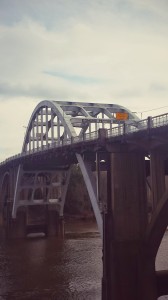 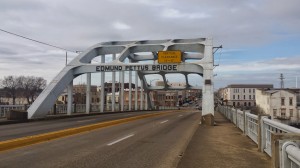 Mesmerized I started walking over it, realizing that my steps had not even an inkling of the power of those that had gone before me. I stopped in the middle and looked up, knowing the Dr. Martin Luther King was a praying man, realizing that this view was one that he probably saw when beseeching heaven for a miracle. Overwhelmed yet again.

I walked back to my car, trying to capture each nuance of the area in my memory.  The question still nagged, would I have marched along side them? I will never know. Nowadays, with how times have changed sometimes it’s hard to even pinpoint the actual enemy, much less the path to defeat it. However, I do know that there are many, many more bridges, not yet charted that need to be crossed. There are too many disenfranchised, trafficked, and lost people begging for someone to march on their behalf. I got a bit worried for a second, my original excuses still ringing in my thougths…the distance, the cost, the danger. Then I was comforted by the thought that even if I am not a dynamic and charismatic leader like Dr. Martin Luther King, he didn’t do it alone either. All he needed was people to stand with him at his bridge and become the crowd that tipped the scale. 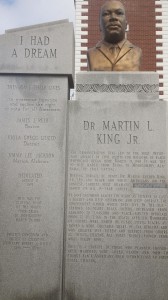 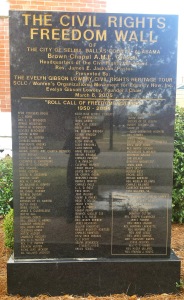 My vision is clearer after today. In my fight against Human Trafficking I will not give up despite the costs, I will not submit to the fear that my small contribution is a drop in the bucket, and I will find strong leaders who are standing at the bridges yet to be crossed, beseeching others to join them. From this point on I want to change my heart to beat the notes of “We Shall Overcome, We Shall Overcome Someday” until someday is today.

Join me, won’t you? What is your bridge?

One thought on “A Certain Bridge in Selma”