During my first week of travel I was expressing to my friend Stephanie that I did not feel like the trip was truly real yet, she asked when I thought it would become a reality to me. I told her maybe it would be the first time that I wasn’t just visiting a friend, when I would be really and truly homeless out on my own. That moment came as I left my friends’ house in San Antonio.

As soon as I had begun planning the trip I had made viewing celestial things like eclipses, meteor showers and northern lights part of the itinerary. The annual Perseid meteor shower was scheduled to peak August 11 & 12th, and I had found a famous dark sky in Texas to view it from with over 800,000 square miles of desert to serve as a canvas for falling stars. Big Bend National Park. 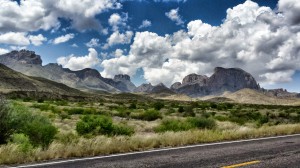 I did some heavy research and outfit my car with rations and a dozen gallons of water and set out just as darkness was falling. I pointed my headlights toward the dark spot on Southern border of Texas and ventured on, armed with a Go-Pro that a very thoughtful and generous friend let me borrow to document my journeys. It was a fairly long drive; the city turned into small towns which gave way to open country, then, darkness. Thankfully, my trusty GPS continued to guide me when signs were few and far between and cell service gave up, I even spotted a single shooting star. I had planned to camp at a place just outside the park entrance called Stillwell Creek. When I made the final turn to the last 30 mile trek from the nearest depot at 1:30am things got interesting, I quickly realized the desert was fully alive, and unaccustomed to midnight visitors. The birds were dive bombing my grill and bunnies the size of dogs were dodging to and fro, coyotes and more were disturbed by the sudden flash of my lights, and swoosh of tires; one such bunny took a flying leap into my rim. My sweaty palms gripped the wheel and I continued more slowly. I finally made it to the camp in which only one other tent occupied. Apparently middle of the summer is not really camping season in the desert-who knew? I chose a spot and settled in, the first night in my car. Due to my animal encounters I didn’t even set my bed up, I just reclined my driver seat, grabbed my pillows and passed out, only to be awakened every now and again by the creepy motion light that would periodically be ignited by something that went bump in the night. I awoke much later than expected, as I had imagined the heat from the sunrise would cook me up. I went to greet the camps owner who graciously gave me free pass due to my late arrival.

Time to explore the park! My goal was to reach the campground located at the southern border of the park which promised the best skies for the meteor shower, but the drive down there was incredible and I got some fantastic pictures along the way (you can see them here). I became increasingly aware about just how close I was to the Rio Grande, which serves as the international boundary for the US and Mexico border. At more than one vista outlook I came across handmade items from Mexican nationals with honor system pricing and a bowl for money; which cleared up the need for signs explaining that such purchases were illegal. I finally made camp and logged into the nearby mercantile internet to get a quick tutorial from my go-pro benefactor. I set up my backseat as a bed and was ready for shooting stars to start. But with a solid 2 hours to kill before nightfall I decided to head down to the river, and there it was beyond a thicket of reeds- The Rio Grande. 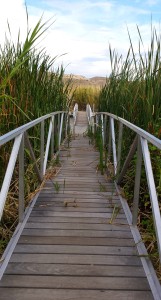 It is within the 118 miles of the river that lay within the parks perimeter that the “big bend” happens, that is, the direction of the mighty river changes, from southeasterly to northeasterly. As I hiked up higher and higher to catch better vista’s and gaze over onto Mexican territory the sun began to set. I rounded a corner and got a distinct message that I needed to turn back around and go back to camp, not another step, but to turn around; so I did. I will never know what was around that bend, maybe it was human or animal or maybe it was just a mic check from God, checking if I was willing to listen and change directions even as the mighty river does.

I trekked back down the mountain in awe of the beautiful dark clouds rolling in promising a summer storm as the sun sank, a little worried that they may ruin my clear skies. I snapped a gorgeous picture and sat for a second at a man made dock with the wind rustling through the reeds twice as tall as I am thinking of how close to heaven the moment was. Little did I know how much I would need that moment in the following days.

I settled into my car bed as the rain fell and set an alarm for 2am to catch some shooting stars. When the alarm went off and my eyes flew open I knew something was wrong, the storm was gone, but the moon was up- shining brightly, with only 2 nights separating us from the supermoon and the meteor shower it filled the sky with light. I set out the Go-Pro anyway, just in case it could see something that I wouldn’t. In the morning I would discover that it caught about 200 shots of a yellow disc moving across a frame. My plan to sit in one of the darkest skies in America was thwarted by none other than the moon, a divine comedy. 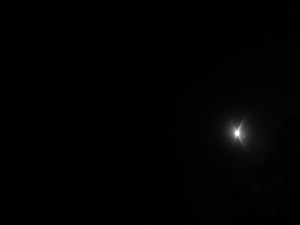 I angrily updated my go-pro friend, complaining about the moons overpowering presence and he gently chided me with the reminder of what a beautiful moon it was; and it was. As they say sometimes you can’t see the forest for the trees, in this case I couldn’t see the star’s for the moon, and I wasn’t going to let it bother me.

2 thoughts on “Can’t see the stars for the moon”