As I made my exit from Big Bend National Park I harbored a new confidence brought on by my first couple nights “in the wild.” I made my way north to see some friends in Midland, Texas. Just as I reached cell signal again my phone alerted to a couple texts and messages I had missed; then it came, a call from my mother. I answered the phone and through some static learned that my friend Ben, with whom I had grown up since birth, and was closer than blood was flailing, his 14 month battle with cancer may end at any moment. I could hardly contain myself- I hung up and went straight into intercession, NO, NOT BEN, not now. I pressed on towards my host families house one eye on the road, the other ready for a call with any news. 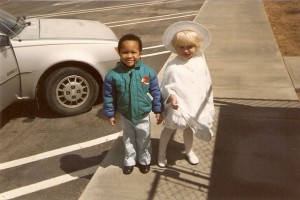 Thankfully I was staying with the Satterfield’s and Lynnie welcomed me with a big hug and concern for Ben. I was resting in her living room when my phone lit up from first my parents home, then my sister. I knew, I didn’t want to believe it. I grabbed my phone and head out the front door- my dad answered and asked me to sit down- I was already bent over my car- Ben was gone. I hit the curb sobbing, and promised I was on my way. My first concern was for his parents and sisters, wife and son. If I was this tore up…I could only imagine.

I walked back into the house and thank God I was with the family I was, they were so comforting to me letting me process, and cry, and kept me busy as I scrapped my schedule and begin to construct my trip to California for Ben’s services. I had been on the road exactly a week and the itinerary was already flipped. In my grief I tapped out a personal obituary to Ben.

You beat me to this earth by 6 months, I think you used that time to get a good head start.
I beat you, though, at having a little sister- but when you had 2 you beat me again. Tricky friend.
Growing up in our small church every Bible bee or Verse-off it was either you or me. A draw.
You got the lead in the Christmas play, and I was just the angel.
Who could play any part better then you? Beat me again.
Then 9th grade we led the youth VBS in a rousing rendition of the ever popular ‘Revolution’- we danced to the beat- and won the crowd over.
Every 4th of July and Christmas time the crazy slips of paper came out and family charades took over the conversation. I always would say I have to beat Ben, secretly knowing that if you were on my team I would win.
You were a wrestling champion, I got my drivers license first- a draw.
I graduated high school first, then you graduated college- winning another round.
Ben you went ahead of me finding the woman of your dreams, and becoming a father. The happiness I saw in you on those days made me realize that even just knowing you was a win for everyone.
With Ben on their team you would win.
Then this cancer reared it’s ugly head- I knew this battle would be harder than any childish game. I saw you fight so valiantly and fought in prayer behind. Never doubting for a second that you would beat it.
But other plans prevailed and today I hear news that you beat me to heaven.
Not fair, who made these rules? Can we hit restart?
But then an ever so small smile peeks from among the tears. Dear Ben, You Win.

The news came down that the services would be 2 weeks away; I had time. Ugly time, difficult time- I knew I couldn’t heart wrenchingly sit in California for two weeks, so I made some modifications and some phone calls for a steady detour trek.

First up on the modified map was Carlsbad Caverns, an incredible system of caves located 75 stories underground in Carlsbad New Mexico. On the elevator ride down the operator advised to turn cellphones to the airplane mode because your phone would search with futility for any sort of signal, thus wearing down the battery. As you descend you feel the temperature drop drastically, and when you step out of the door you fight the claustrophobia that arises with the knowledge that the earth is ever in motion and an earthquake could easily leave you buried without breath at any moment. Then your eyes adjust and you force those thoughts to the back of your brain and focus your eyes to the beauty all around. (check out the pics here) I was exploring the great room of the caverns with new formations at every turn, when I happened upon a sign indicating that the point I was standing at was the highest point in the caverns and was known as the top of the cross. With one arm extending to the big room, or hall of giants and the other ending up as what is known as the bottomless pit. 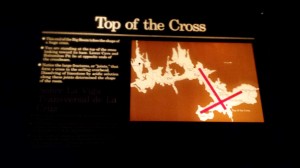 Tears sprung to my eyes as I recognized this symbol of faith even in the darkest pit of despair. Phrases from Psalm 139 flooded my head. “Where can I go from your Spirit?” “even the darkness is not dark to you.” “If I make my bed in the depths, you are there.” Even there.

I got back into the elevator and at the exit caught a panorama over the New Mexico emptiness, a summer rainstorm that looked small in comparison to the vastness that was the plain. The storm had come and gone while I was enveloped beneath the earth’s surface.

The next day I was off to Colorado to see my friends and mentors who currently reside in Denver. I had planned to explore Colorado with them later in the month but they were gracious enough to host me with hardly a days notice to reschedule. I got to go to their church that Sunday morning and then with lunch packed and their 2 daughters in tow we were off to drive the Mt. Evans scenic byway. In a short 6 miles the road rises 14210 feet, and boasts the highest paved road in America. Us 4 gals were on our way to what is known as the top of the continent. We stopped at a lake about a third of the way up thinking that was it, but while we were seated we looked up to see we had so much more to go; as we got higher and higher the road got steeper and narrower yet had no rails, a fact which I noticed right away and hesitantly mentioned to my friend Raquel. Our scenery changed from forest, to twisted trees, and scrub and rock. Finally, with some breathless views and and touches of altitude sickness we made it to the top (check out the pics here). I was standing atop the purple mountains majesties, above fruited planes. My car could take me to no higher point in America. The words of Psalm 139 flooded my spirit once again: “If I go up to the heavens.” If I rise on the wings of the dawn” “Where can I flee from your presence?” 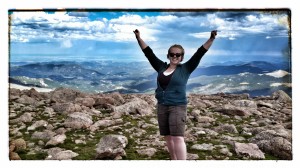 That night I wondered with Raquel and her husband Eric that within 2 days I been in the lowest and highest points in America, and in those moments felt God’s presence despite the fact that my trek was pointing towards grief, sorrow, and loss.

Nearly two weeks later I would stand up and speak at Ben’s Memorial, and it was the words of Psalm 139 that I had literally lived out in the path to that moment that carried me through. My detour to California would take me 2 more states and 1,000 extra miles. Ever present were the words: Even there.

4 Before a word is on my tongue
you, Lord, know it completely.
5 You hem me in behind and before,
and you lay your hand upon me.
6 Such knowledge is too wonderful for me,
too lofty for me to attain.

7 Where can I go from your Spirit?
Where can I flee from your presence?
8 If I go up to the heavens, you are there;
if I make my bed in the depths, you are there.
9 If I rise on the wings of the dawn,
if I settle on the far side of the sea,
10 even there your hand will guide me,
your right hand will hold me fast.
11 If I say, “Surely the darkness will hide me
and the light become night around me,”
12 even the darkness will not be dark to you;
the night will shine like the day,
for darkness is as light to you.