I am rounding the corner on my last days in Dallas, Texas. There is so much to do, household items left to sell, things left to purchase. The hardest part is finally “getting around” to coffee or dinner with people I have been procrastinating meeting with and saying goodbye. My time is being consumed with calenders, maps, and mileage.

Lately, the response to my debt free strategy and trip has been tremendous! Jon Acuff retweeted my blog out, I was asked for an interview with Michelle Moran (you can hear it here), even Smag31 picked up the story. Over 1200 people have read about the journey so far! I never could have imagined the impact. My favorite message to get is from people who have renewed the fervor to eliminate their debt or are inspired to start something they have always wanted to do. One of the goals of this trip is for everyone I come in contact with to ask themselves: “Why Not?”

Some good friends have offered their support by facebook, twitter, and text asking how they can help, even offering financial assistance. Up to this point, I have scoffed at the idea, mostly because I have worked so hard to make this trip happen on my own steam, hard work, and ‘ingenuity.’ Truthfully, I could use a corporate sponsor, (gas is expensive and I have a large swath of ad space on my car) but as it lays right now, I can make it on my own. I would hesitate to ask for money for my own adventures when far better causes abound, yet that little seed began to germinate in my head.

Last night I was reminded of a something that happened during a trip to Hawaii to visit my little sister who lives with her husband on the island of Oahu. My sister greeted me at the airport with a flower lei. We hopped in her car and as I listened to the radio I heard people calling in to win a trip to California. I chuckled because some people on the mainland make visiting Hawaii their ultimate goal in life, it’s considered the quintessential vacation, and yet Hawaii’s citizens wanted to win a trip somewhere else, just like me! It cracked me up..but my laugh was short lived; because we hit some ugly traffic… at 9pm at night! My first reaction was: ‘how could this be, traffic in Hawaii!?!’ Logically it makes perfect sense that a small island with a dense population and limited infrastructure due to mountainous terrain would have traffic problems. However, I had this picture in my head of what paradise would be and traffic didn’t fit into that pretty little picture. 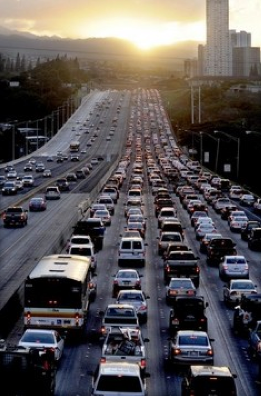 For the past year I have worked and scrimped and saved to live out this paradise of a dream of traveling to all 50 states prior to my 30th birthday. Amongst the hustle I had a singular goal, pay off debt & go on trip, that was all. My tired head must have missed that this would be an incredible platform and as the clouds have cleared a thought has emerged, there is traffick in my paradise An issue that has long been close to my heart is the exploitation and sex trafficking of young children and women both domestically and abroad. Some estimates say that there are currently 27 million modern day slaves worldwide. I have traveled abroad, and have worked in 4 star hotels in America and have witnessed the ugly underbelly first-hand. The numbers are staggering, but even 1 would not be acceptable. In the past I have felt paralyzed by the numbers, what difference could I really have? So the question floated to the top:

Could a road trip stop traffick?

Then I pressed pause on the fear and applied my own message telling myself: “Why not?”

I brought this to some friends and family on my facebook and with every comment one worthy anti-trafficking cause after another came into view. Obviously the need is overwhelming, but I don’t want to be overwhelmed any more. If the past year has taught me anything it’s that once you decide to do something, add creativity, and gather a community around yourself, impossible things are changed to possible. 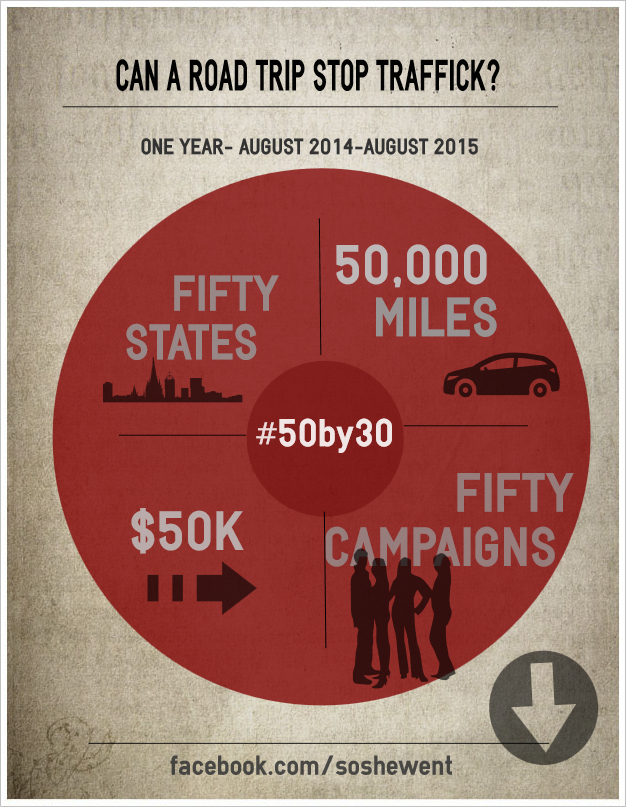 I will be using each mile that I drive as a goal to raise $50,000 for the International Justice Mission and Project A21. These are two incredible vetted organizations that focus on reaching, rescuing, and that part I find the most beautiful, on restoring victims of sexual trafficking, exploitation and slavery on an international scale.

In tandem, I will ask 50 of my friends to stage campaigns of various personally established amounts for anti-trafficking organizations in their own back yards. Will you be one of those friends?

Suddenly, #50by30 has gone from something I could make happen to something that I hope will go far, far beyond me; and I couldn’t be more ready. I am thrilled to be able to announce this on the Fourth of July seeing as I won’t stop until there is liberty and justice for all. #50by30 is starting August 6, 2014.

8 thoughts on “I Hate Traffick”